skip to main | skip to sidebar

My Evening with David Archuleta 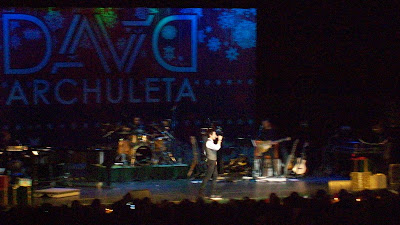 I am 38 years old. I'm probably a wee bit old to be blogging about a David Archuleta concert, but so be it. I am hooked. Much to the Mister's chagrin. I just wanna fold Archie up and put him in my back pocket! 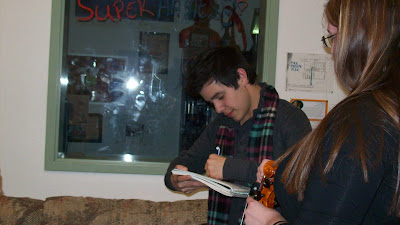 David spent our dinner hour with us, before the concert began. There were about 20 of us string players, and he graciously signed autographs and let us take all the pictures we wanted with him. I considered this a rare privilege, because with other celebrity artists we have collaborated with, security staff doesn't allow any one-on-one time with them. David treated us all as individuals, answering our questions, laughing with us, and even having an informal viola lesson... as if he had no other obligations in the world at that particular hour. There we were, hanging out in Blackfoot High School's choir room with a world class artist. And our own little security detail. David is genuine and without any pretense. Humble and authentic. And... a bit shy. But you wouldn't know that by watching him onstage. 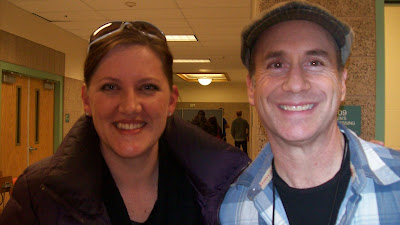 All because of this man.... Jeff Archuleta, David's father and manager. He was incredibly gracious and friendly. He took care of us all day. By the time the concert was over, he felt like an adopted dad. For example, Jeff was asking us what we wanted for dinner... "Pizza? Sandwiches? What is available here in Blackfoot?" When we decided on pizza, he asked if anyone had any food sensitivities, etc. and one girl shyly raised her hand. Jeff asked her what she couldn't eat, and she mentioned a gluten allergy, and he was concerned trying to resolve the issue, etc. Pretty cool. 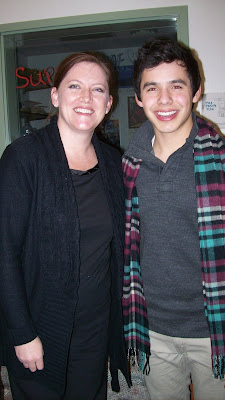 Here are some things I observed that impressed me. Truly...

On a personal note, I misjudged this kid. "I wish he would go on a mission," I thought. But after spending a day with him, hearing his music, seeing him interact with his non-member staff/security, seeing the quiet things he does for the youth in the community, as well as observing some other private moments of his, I can honestly say, "Maybe he is serving a non-proselyting mission." He is stellar and I was moved by his standards, his compassion for the people around him, and his commitment to the Savior.

For example, most artists have a 'meet-n-greet' staff member, who opens the show for them, takes care of the VIP clients, etc. David's MNG guy was telling us that he has opened shows for Christina Aguilera and Katy Perry. But he loves opening shows for David because D.A. draws a unique fan base. MNG guy mentioned how respectful and 'well-behaved' his fans are-- no disorderly drunks, foul mouthed people to contend with.

And did you know David's keyboard player (Mark Nilan) plays for Glee? (I hate Glee, but it's a pretty prestigious kudo, anyhoo...)

Also, D.A. won't sing about romantic drama songs. "I've never been in love, so I'm not comfortable singing about it. It's just not me." And he doesn't disappoint. I love that standard.

Also, as long as I'm on the confession wagon, I have to say I did watch his season on American Idol and rooted for him. But after? I wasn't crazy about his music. Until now... I loved every song he sang, and loved every minute of it. (And Thanks to another adoring fan, my neighbor Renae lets me know I am not alone... she was at the concert as well, and she came by tonight to give me a dvd copy of D.A. w/ MoTab. I love it!)

When asked by a fan before the show what his most memorable experience in his career was up to this point, he answered without hesitation, "Performing with the Mormon Tabernacle Choir." (Not, 'shooting a Ford commercial' or 'being runner up on American Idol', or 'making my first cd', etc.)

Bottom line-- this is quality, clean entertainment. Where else can you find that today? Worthy of the title, American Idol. In my book.

*Weird side note: David's musical arranger is Richard Parkinson. I dated Richard in high school. Funny, eh?
** I had David autograph my violin case. In gold sharpie. Because I'm 38. And I have a CRUSH.
Posted by Annalee Kelly at 7:41 PM

LOVED this!! I'm taking Aubrey and her friends to the David Archuleta concert in SLC in a week, but Aubrey and I were sick with jealousy that you all got to have this opportunity. SICK WITH JEALOUSY!!!! I liked your take on him going on a mission... I've wondered the same things. I fully know that he is already a missionary, and that he can do untold good just being himself, but I also worry that some will use him as an excuse not to go on a mission. My conclusion is that those few people who would not look at the big picture here would find any other excuse anyway. ;)

Sorry to bust in on your blog but I couldn't help it! Hope you don't mind!

I have had the extremely unique and unexpected privilege of being an uber-David fan since he first opened his mouth on American Idol. It has taken me places I never expected or even planned on going. I say unexpected because although music is my thing in life, I am older than you, with grown children, and following the career of a teen-age pop star was definitely never on my bucket list.

All I can say is "You have no idea!" David is all you have said and worlds more. I could not even begin to tell you of the miraculous and spiritual experiences I have had with him and his fans. (I would be happy to share them via email, which you have when I post). And I have plenty to say about the mission thing!

David is a unique and blessed individual and I am just grateful for the experiences Heavenly Father has given me! Thanks for recounting your experience!

Oh and double weird! Richard Parkinson and his family are our very dear friends now because of David.

Thanks for your blog and glad you got to spend some time with David. I am not LDS, but I enjoy his artistry and hope he continues to grow so we can enjoy his beautiful voice for years to come!

What a sweet, special, amazing, fun, and did I say special(?)story!
I've been hooked(line & sinker) since his AI season--I had never watched AI before that. I'm a mother of 3 grown, married children and a grandmother of ten. So, yes, I've heard lots of music in my time, and none of it compares to David's. He can hypnotize and mesmerize just by being himself---which is exactly why he is so special to so many.
His spirit is so contagious. When you are in his 'allowed' space, you are treated with respect and care.

Thanks for sharing your experience, it makes my heart happy to see others so happy!

I loved that story. Yes David is not "one of the most amazing" he is "THEE MOST" amazing young man that I have ever met my life. I like you I think he is on a mission a life time mission.
We are in for a big long ride with David.
And we all have a CRUSH!!

Annalee Kelly
I am honored to be married to my husband extraordinaire Joseph, for 15 years. Our joy is full (most days) because we are blessed to have these children in our family: Joshua (12yrs), Emma (10 yrs), Caleb (7yrs), and Elizabeth (5 yrs.). I enjoy camping with my family, cooking, reading, playing and teaching the violin and blogging. Our story began over 15 years ago at Ricks College. We have moved 9 times in 14 years, but have come full circle to the city where we were married and sealed in the LDS temple.

A Few of My Favorite Things...